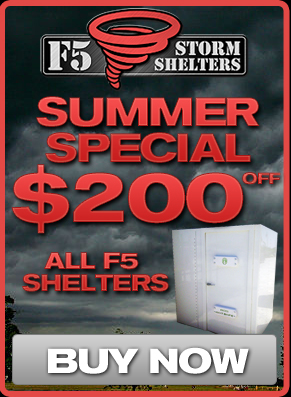 Are you a recent transplant to the state of Oklahoma or a local that has been putting off purchasing a storm shelter the last few years because of costs? If so, you may benefit from F5 Storm Shelters’ Summer Savings Special. Right now, at both of our OKC and Tulsa locations, we are taking $200 off any underground garage storm shelter, above ground safe room, or outdoor storm cellar purchase. These are some of our lowest rates of the year and they are available to you and your family for the entire month of August. All you have to do it call or come by one of our showrooms, choose the storm shelter that is right for your family and mention you read about our Summer Savings discount on our website and we will subtract $200 from the total price! You can’t get much better then that.

Don’t wait until the Spring season when everybody in the state is trying to have a storm shelter installed for storm season, plan ahead and get your shelter installed now. Not only will you save a ton of money, but you also don’t have to worry about extremely long waiting lists and you can guarantee that your family will have the safety and piece of mind they need when they need it most, tornado season. We have staff on hand that are ready to answer all of your questions and show you all the shelters we have available. Financing is currently available through credit unions for as low as .75%!!!  Think ahead and call F5 Storm Shelters today!

When most people in Oklahoma think about tornado season, they tend to think of the spring time. This is true, The months of March – June is typically considered, by most, to be the most active time of the year. However, something people often fail to notice is that the Fall season doesn’t just bring cooler weather and pumpkin flavored beverages, it is also comes with tornadoes. Did you know that outside of our typical spring storm season listed previously, that the month with the highest amount of tornadoes recorded is October!! Since 1950, there have been 129 tornadoes reported throughout the entire state of Oklahoma. That comes out to a two tornadoes a year average. This occurs happens when the jet stream shifts farther south into the United States after retreating northward during the summer months. An active jet stream pattern provides the deep wind shear necessary for super cells and large outbreaks of severe storms.

are you starting to panic? Ok, well hold on for just a second. Fall tornadoes are slightly less likely to be strong or violent than their spring counterparts. About 20% of fall tornadoes are rated F2 or stronger compared to 28% in the spring. Catastrophic F4 or F5 tornadoes are rare outside of the spring season. That being said, damaging and deadly tornadoes can happen at any time of the year.

F5 storm shelters is here to ease the fear of severe weather. We have stores in both Oklahoma City and Tulsa that services the entire state and beyond. Make sure your family is safe whenever the sirens sound. Whether it be in Spring or Fall. Stay Alive, Call F5!